The 350 cc modern classic motorcycle segment has average monthly sales of more than 50,000 bikes, all from Royal Enfield. And now, Royal Enfield has introduced the new Meteor 350, with an all-new chassis and 350 cc engine, which will be shared with other 350 cc Royal Enfield bikes in the near future. Honda Motorcycle and Scooter India (HMSI) has been eyeing this segment for sometime now, and wants a slice of the action. So the all-new Honda H’Ness CB 350 has been introduced, to try and dethrone Royal Enfield from the 350 cc throne that it currently occupies, with a suitable, but somewhat weirdly named product. 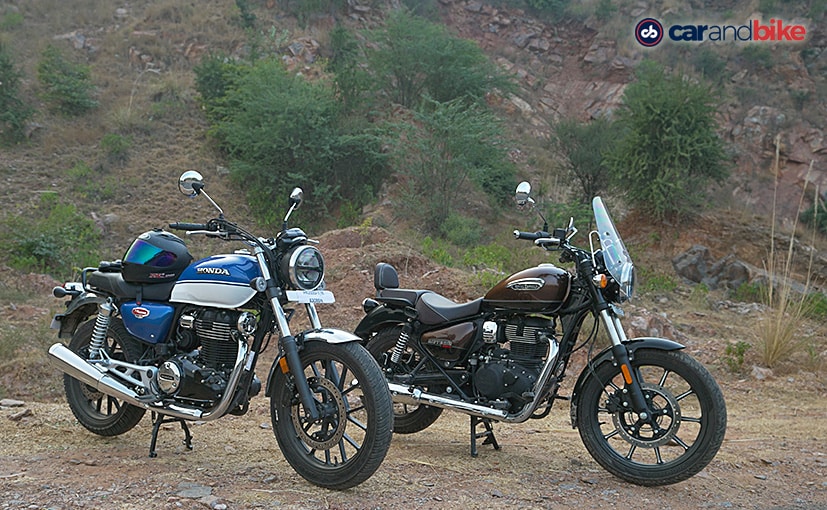 Now, Royal Enfield considers the 350 cc modern classic segment its own kingdom, and the Honda H’Ness has been made in India, primarily for the Indian market, to shake up the segment. But does the new Honda CB 350 have what it takes to take the fight to Royal Enfield? We spent some time hustling both bikes, back to back, in the city, on the highway and the nearest twisty roads to get a sense of which one makes for a better buy. 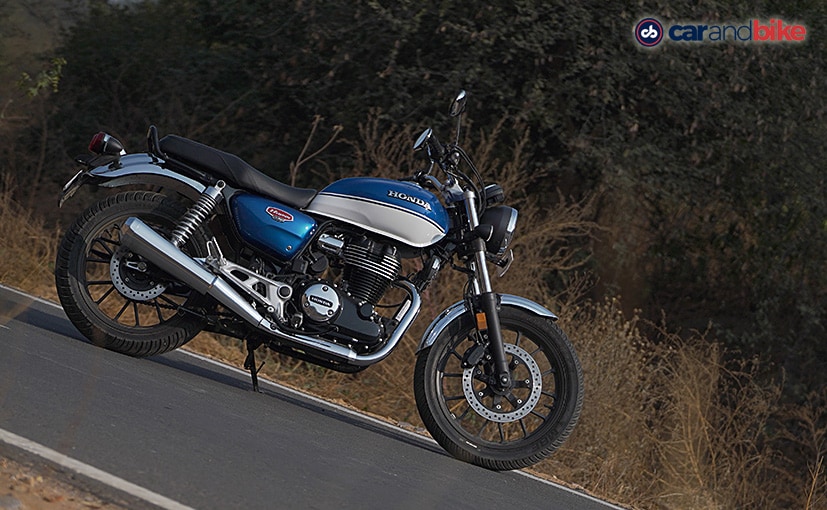 The Honda H’Ness CB 350 has the apt design for a neo-retro roadster, with design by Honda’s storied CB series roadsters from the past

The Honda H’Ness CB 350 oozes retro appeal, taking design inspiration from Honda’s history, from the CB series roadster motorcycles from the late ’60s and ’70s. The round headlight has that classic charm, but it’s LED, as is the retro-styled taillight. The turn indicators have an outer ring which are illuminated all the time (sort of running lights). Overall fit and finish is quite nice, with very good paint quality. The dual-tone paint scheme is a definite nod to the 1970s, and even the retro-styled Honda badge is period-correct. The H’Ness name and badging is the only sore point in our book; Honda should have just called it the CB 350. 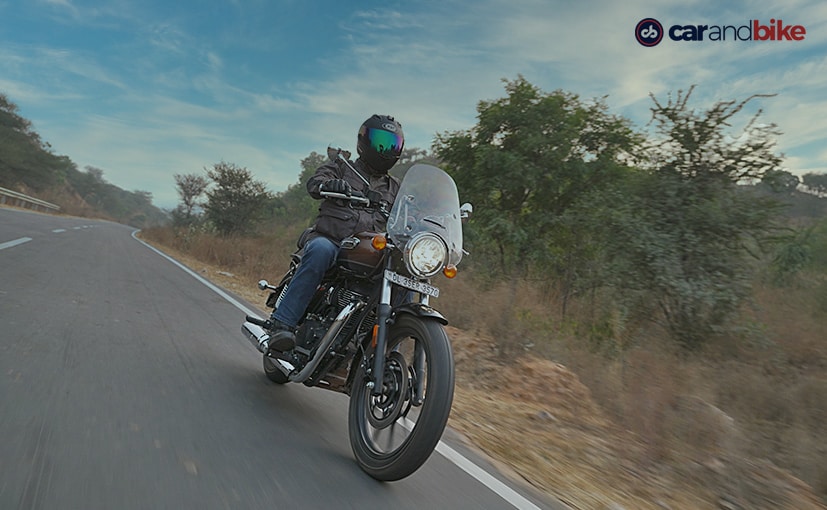 The Royal Enfield Meteor 350 is unmistakably a new Royal Enfield, with some modern touches. But it’s still a Royal Enfield, and unless you look closely, it still resembles the Thunderbird 350 which it replaces, albeit with a cosmetic makeover. But look closer and the changes are apparent. The period-correct rotary switches are new, the tapered hand grips look old-school cool, and are easy to hold as well, and the bike gets new colour options, along with a new instrument console; but more on that later. 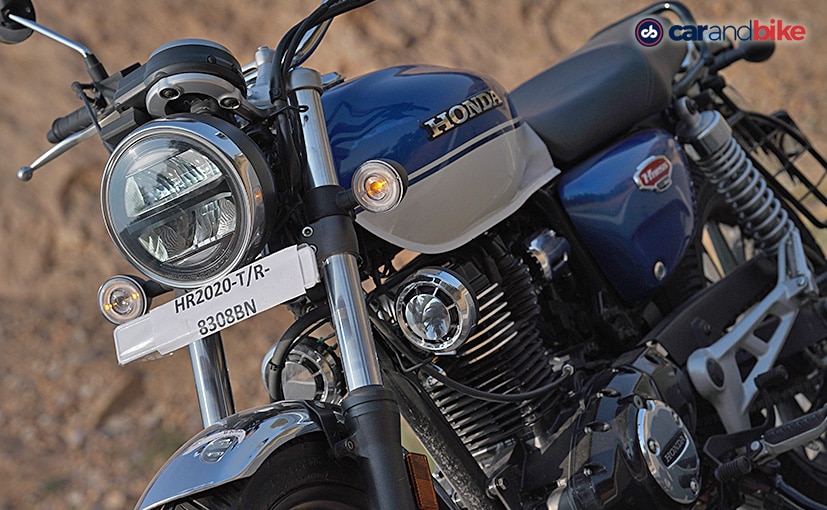 The round headlight has the classic shape but is LED, while the turn indicators have an outer ring which are illuminated all the time

The Honda is the more compact of the two bikes, although it looks longer. And the Honda CB 350 looks neat with clean lines and is well-proportioned with a nice stance. The alloy wheels are shod with tubeless tyres from MRF and come in a 19-inch front and 18-inch rear wheel combination. The design of the alloys complements the neo-retro silhouette and the fenders are finished in chrome to underscore the retro appeal. The slightly upswept exhaust is also finished in chrome, and overall fit and finish is quite nice. In comparison, the Meteor 350 has a cruiser-ish stance, with the tear drop shaped fuel tank, low seat and forward-set footpegs. The silhouette is unmistakably Thunderbird, but it’s somehow not as proportionate as a cruiser, and not quite an attractive retro roadster, like the Royal Enfield Classic 350. 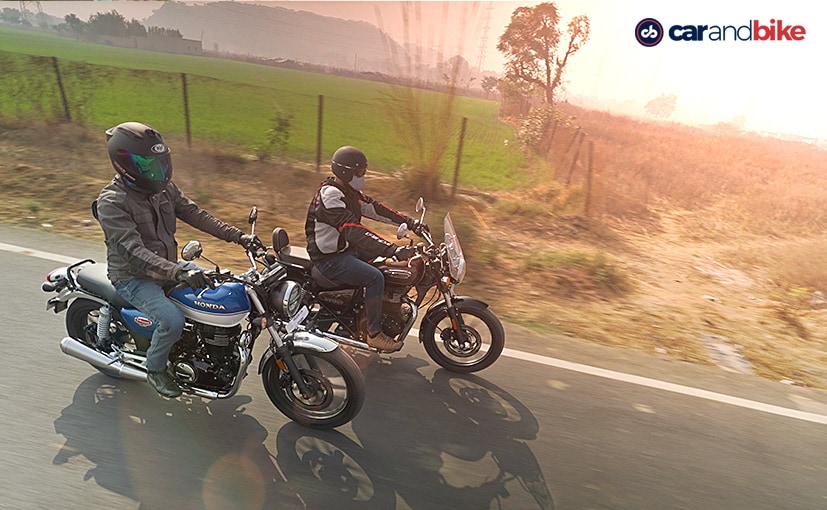 Both bikes have 350 cc, single-cylinder engines, with the trademark ‘thump’. The idea is to offer effortless, easy cruising ability, and on that count, neither of the two disappoint. As soon as you fire up Honda’s engine, it’s immediately apparent from the exhaust note that the Highness has Royal Enfield in its sights. It’s a raspy, nice and loud thump, with its own character even, and once you slot His Highness into gear, it’s apparent that it has a slightly different personality than any Royal Enfield. 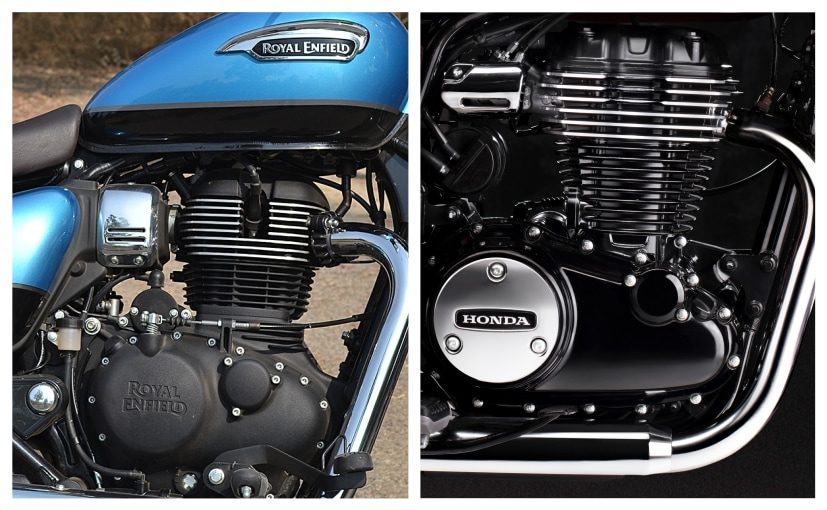 Both motorcycles are similar in term of power and displacement. However, the CB350 makes 3 Nm torque more than the Meteor 350

The Honda’s 349 cc, single-cylinder, air-cooled engine makes 20.8 bhp at 5,500 rpm, but has 30 Nm of best-in-class torque, which peaks at a low 3,000 rpm. In city speeds, the CB 350 feels more eager, and quicker. But the Honda’s gearing is tuned to seek more downshifts, and the engine, though refined, asks for more revs to keep its performance in a happy place. Although top speed is well over 125 kmph, the Honda does require a downshift or two for overtakes. Comparatively, the new overhead cam 350 cc Royal Enfield engine feels throatier and more relaxed at the top end, even though top speed is marginally lower at 120 kmph. The new RE engine may be smoother than the earlier UCE 350 of the Classic 350, but it’s the Honda which feels more refined. 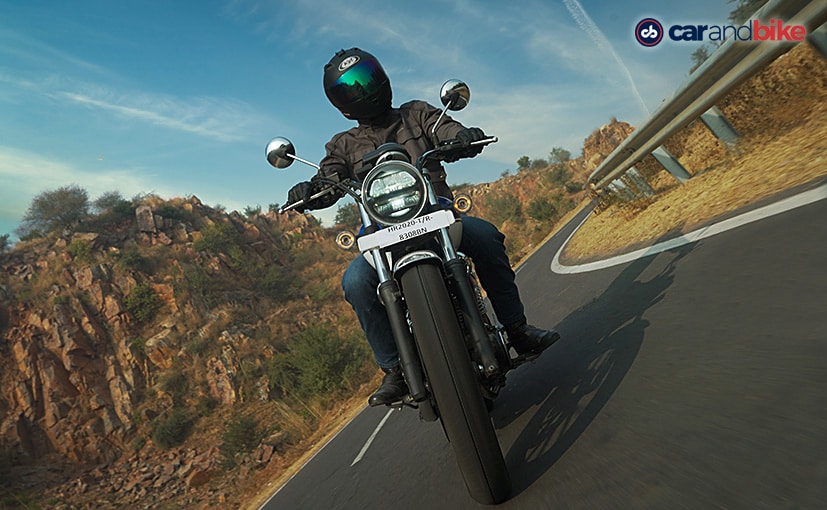 The Honda CB 350 gets a slip and assist clutch, and a slick 5-speed gearbox

What also goes to the Honda’s advantage is that it’s a full 10 kg lighter than the Royal Enfield with its 181 kg kerb weight. The turning radius of the CB 350 is also tighter, and it’s the Honda which feels more agile, and more eager around corners, and in traffic. The Honda also gets a light clutch lever, thanks to the slip and assist function, and the gearshifts are slick, so it’s not much of a chore to work the five-speed gearbox. 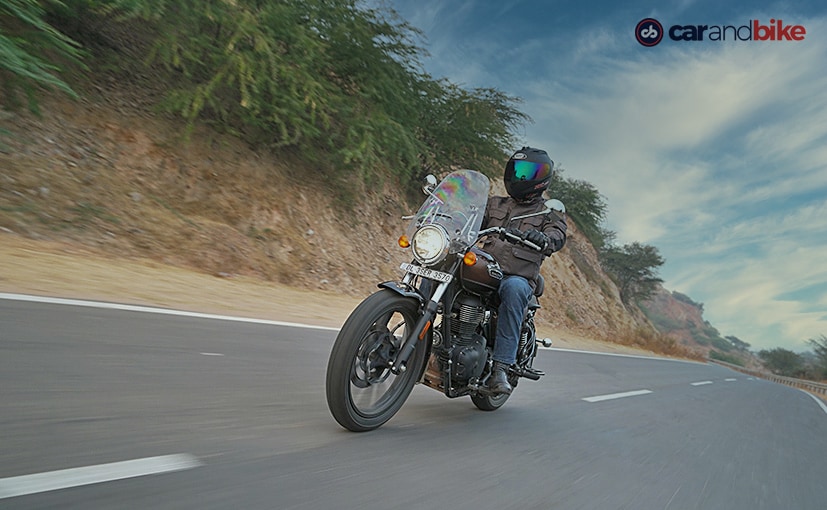 The Royal Enfield though has better ground clearance, (175 mm compared to the Honda’s 166 mm), and despite its heavier weight, it still offers that solid, stable feel on the move. In city speeds, the Royal Enfield requires less gear changes and even when sitting on highway speeds, will pull strongly, without needing a downshift. However, when ridden back to back, it’s the Honda’s light clutch which makes city riding more effortless. And it feels livelier and more energetic, from an acceleration point of view, as well as its dynamics. 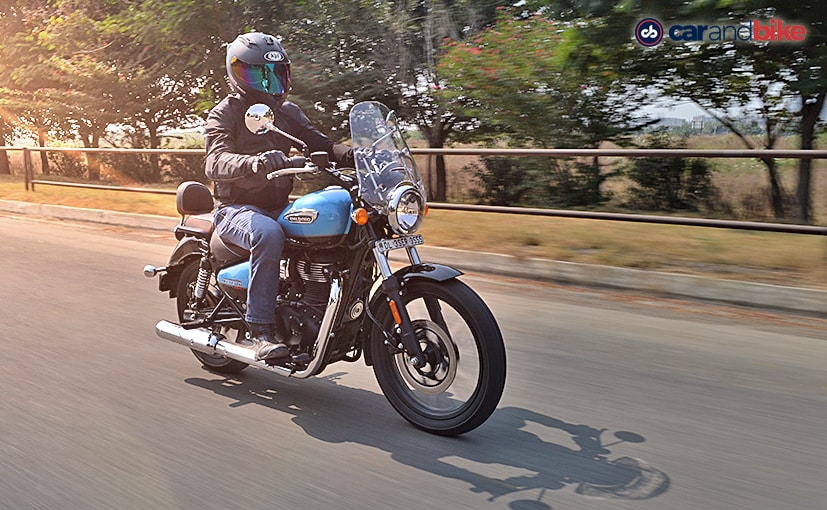 When I first rode the Royal Enfield Meteor 350, it felt more refined and better built than the recent test bike I rode

My only gripe here is that the first unit of the Meteor 350 I rode before, felt more refined, than the one that I’m riding now, which feels a little less refined, and crude even, when compared to the CB 350. There could be one of two reasons for this, or both. Either the test bike needs some TLC, like a basic service, so that should be an acceptable solution. But if it’s an issue with two units of the Royal Enfield feeling noticeably different in engine refinement, then it’s an issue which has been plaguing Royal Enfield over several generations. If the latter is true, then it’s a serious issue with consistent quality control, and needs to be looked into, and addressed, as soon as possible. 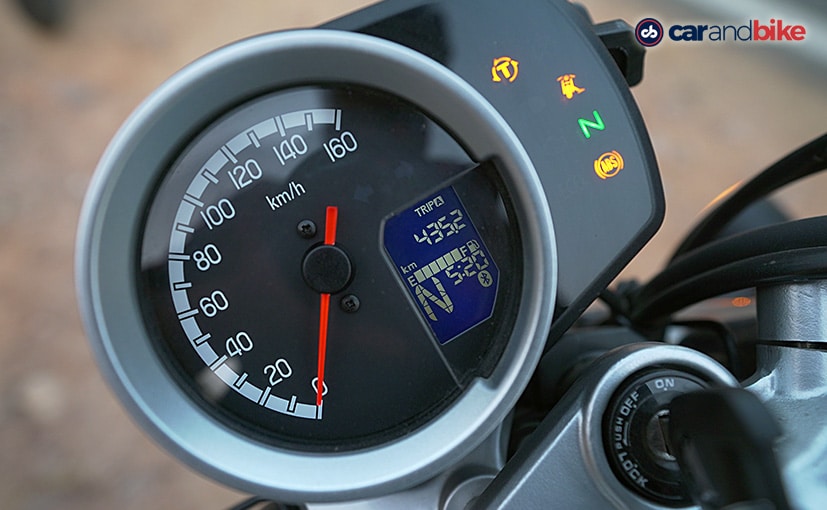 The single-pod instrument console has a digital screen with a lot of information, including distance to empty and average fuel consumption

In terms of features, the Honda H’Ness CB 350’s speedometer is a single-pod analogue unit, but there’s also a small digital screen with a long list of features. It has a clock, fuel gauge, battery voltmeter, gear position indication, distance to empty, average fuel consumption, and also features a side-stand down indication, which also doubles up as the engine inhibitor, preventing the rider from starting the bike in gear if the side stand is down. 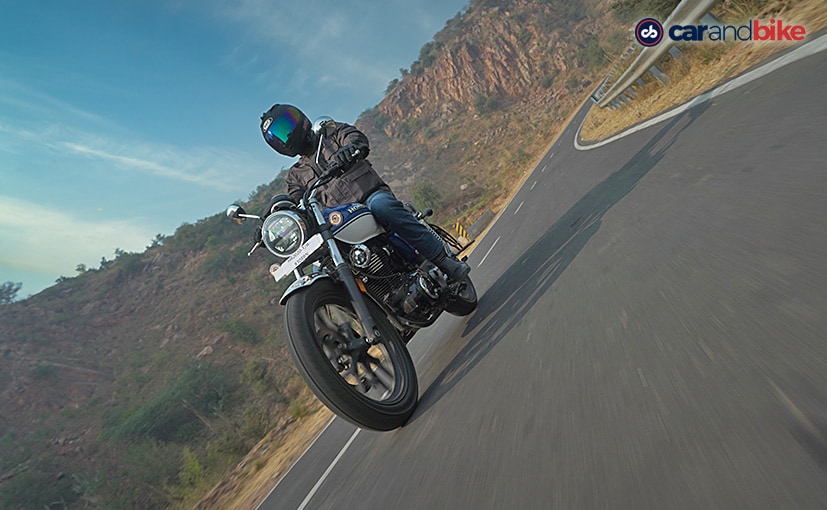 The CB 350 also features a first-in-class Bluetooth connectivity system called the Honda Smartphone Voice Control System, which allows the rider to use a dedicated Honda RoadSync app to access features through an accessory helmet-mounted Bluetooth speaker system. The system offers audio access to things like turn-by-turn navigation, incoming call alerts, and even music playback. It does require a separate helmet-mounted Bluetooth speaker system which needs to be purchased separately. The CB 350 offers an upright riding position, like that of a typical roadster; it’s neutral without being too aggressive, and comfortable for daily work in the city 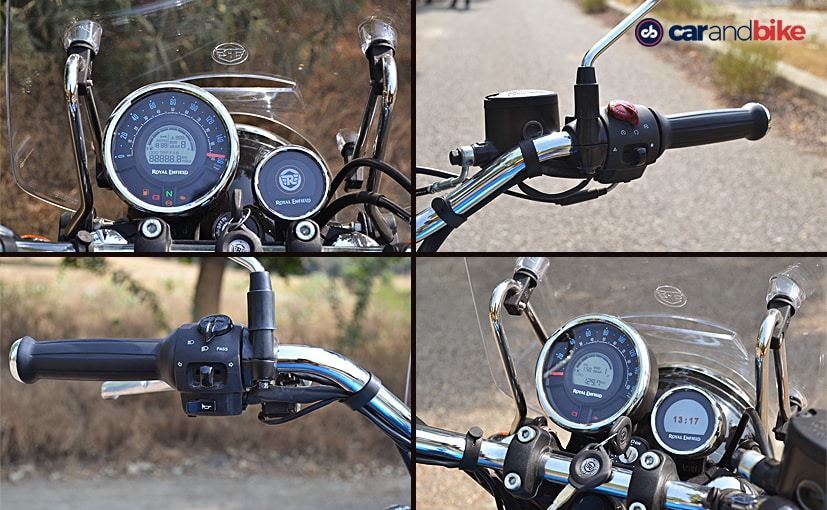 On the other hand, the Meteor 350 gets an all-new asymmetric twin-pod instrument console, with the bigger dial housing the analogue speedometer, and a small LCD console with read outs for twin trip meters, odometer, clock fuel gauge and a gear position indicator. It misses out on fuel consumption readings, or distance to empty. The smaller pod on the right displays a bigger read out for the clock, but also doubles up as the display for turn-by-turn navigation, accessed through the Royal Enfield Tripper app, and powered by Google maps. The system is simple, but works well.

The Royal Enfield Meteor 350 packs standard dual-channel anti-lock braking system (ABS). The front wheel gets a 300 mm rotor, while the rear wheel gets a 270 mm rotor. Braking performance of the CB 350 though is a lot better, and the Honda’s brakes offer better bite and progression from its Nissin calipers, although the Meteor 350 offers adequate stopping power to shave off speeds in a hurry. But what the CB 350 gets is segment-first traction control system, called Honda Selectable Torque Control System, despite the throttle not being ride-by-wire. The system works through electronic sensors which senses wheel slip (like on a wet road, for instance) and will immediately modulate the fuelling to alter the power and torque to the rear wheel to allow it to get grip. 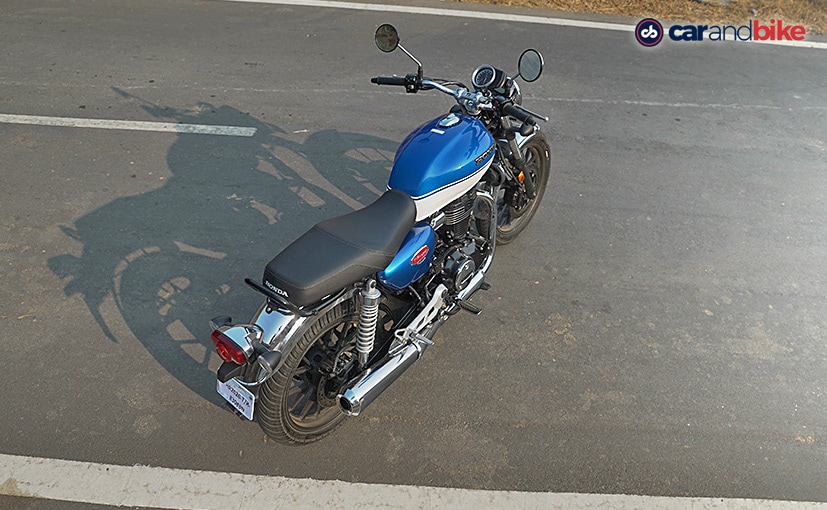 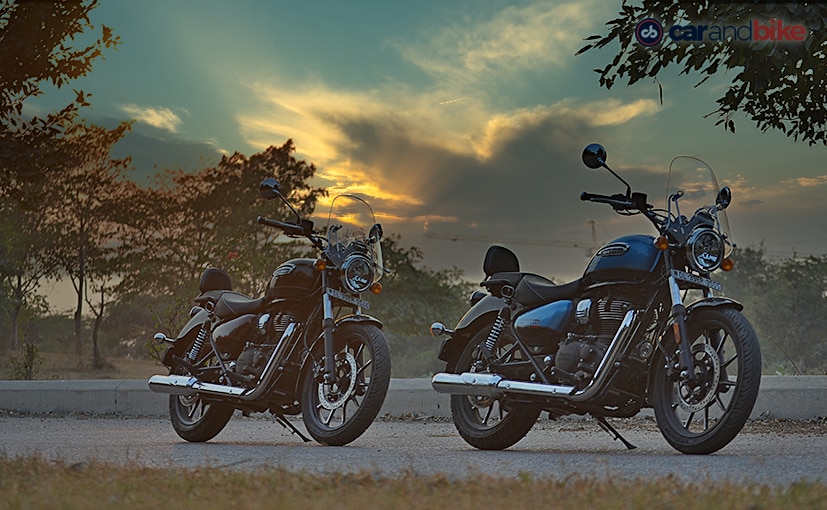 New Royal Enfield Meteor 350 will be offered in three variants, with scope for further customisation with genuine accessories 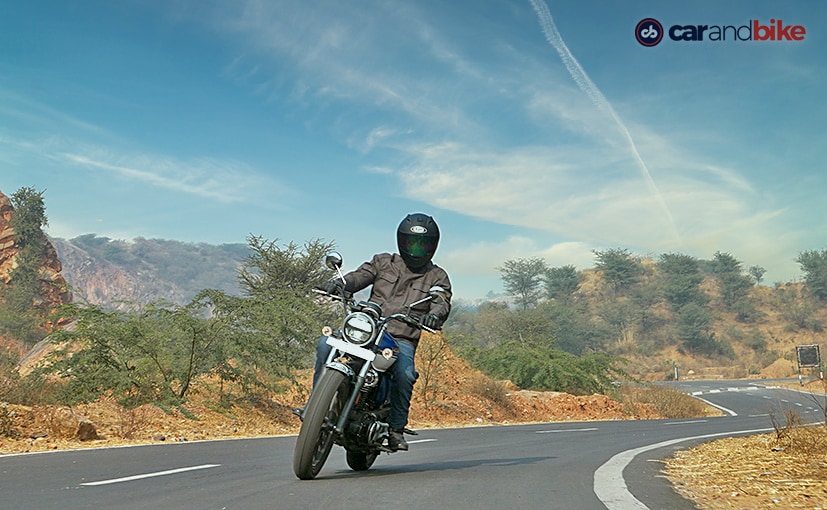 Eventually, it will boil down to personal choice to choose one over the other. In our book though, if we have to choose one winner between the two, it will have to be the Honda. It’s the better all-round product, looks better, sounds better, and the engine feels more refined and sophisticated than the Royal Enfield. What goes against the Honda H’Ness CB 350 is its availability. Right now, it’s only retailed through the limited Honda Big Wing network, and so it’s not available on sale across the country. Comparatively, Royal Enfield has a far bigger sales and service network, which makes it the more sensible purchase. 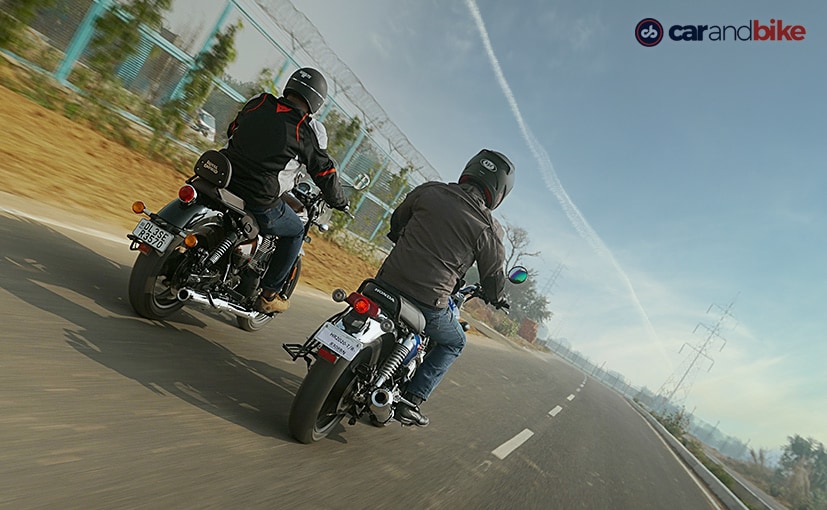 Royal Enfield offers a better sales and service network, while the Honda H’Ness CB 350 has limited reach through the Honda Big Wing network

In the end though, it’s also what the new 350 cc Royal Enfield offers. The Meteor 350 is just the beginning, and in the coming months, we’ll see the new generation Classic 350, as well as the new Bullet 350, both with the same engine and chassis, but in a more authentic modern classic flavour. It finally boils down to the strength of the Royal Enfield brand, fuelled by emotion and passion, which Honda will have a tough time to overcome. Even with ‘His Highness’ leading the campaign, Honda still faces an uphill task to unseat the king of the 350 cc retro roadster segment. 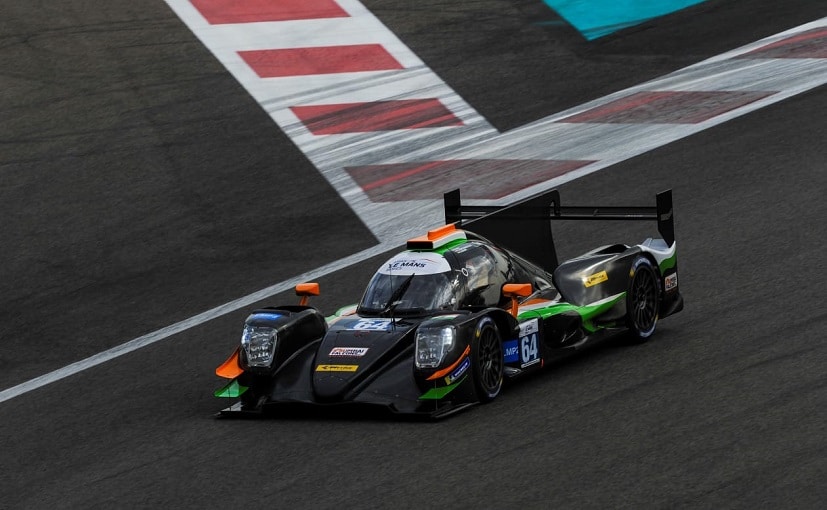 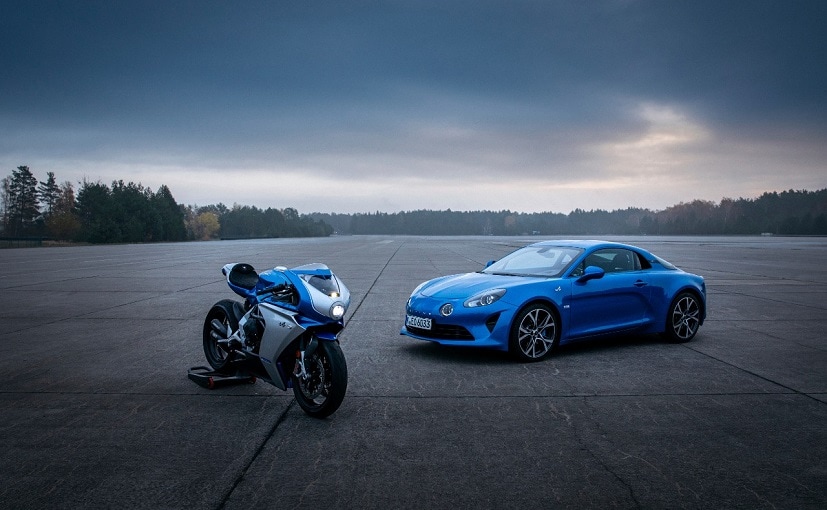 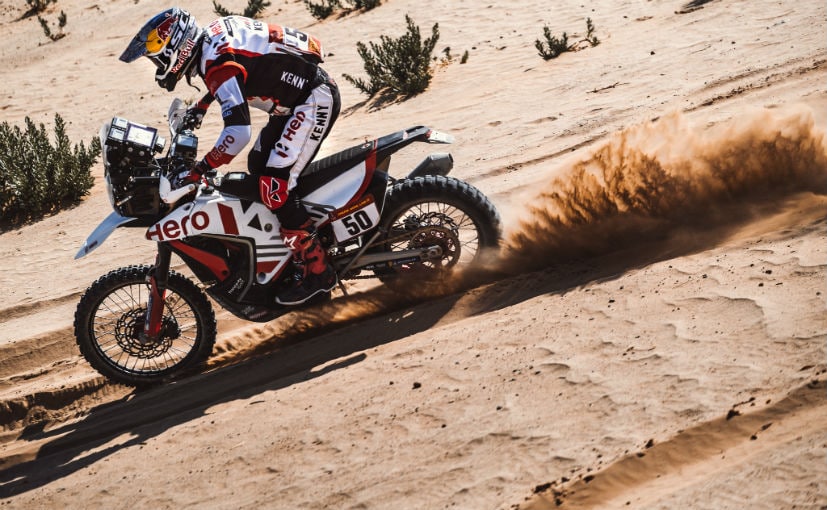 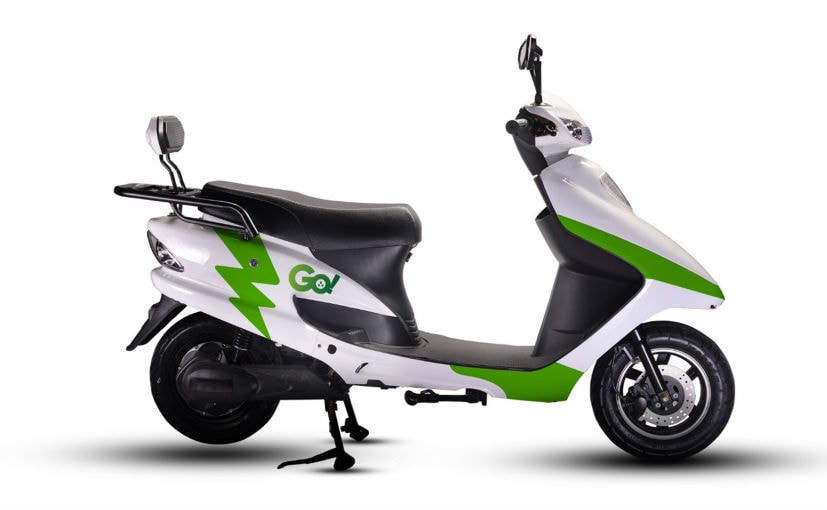 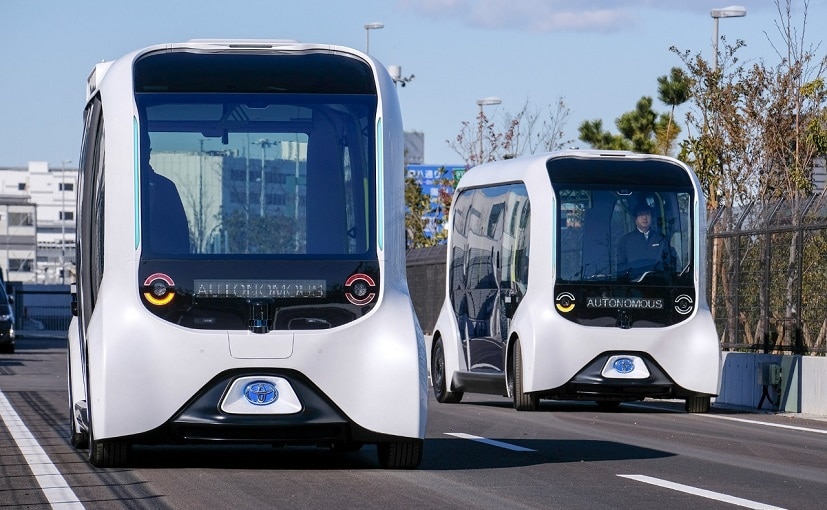