Prime Minister Narendra Modi is expected to respond to the Lok Sabha debate Motion of Thanks to the President’s address today. Mr. Modi had responded to the discussion in the Rajya Sabha on Monday.

The Lower House has been witnessing disruptions on the issue of the three farm laws that farmers have been protesting against. The Upper House bid an emotional farewell to four Members from Jammu and Kashmir during its sitting yesterday.

On age relaxation to SC/OBC under EWS quota, Union Minister Krishan Pal Gujjar says, “When OBC and SCs were given reservation, circumstances were different. Not many applications were received and relaxation in age criteria was given. Under EWS we receive adequate applications.”

Manoj Jha raises the issue of lateral entry at Joint Secretary level and asks if the Department of Personnel and Training (DoPT) consulted the Social Justice Ministry on the decision.

“Members sitting in the Rajya Sabha gallery are not being shown on Rajya Sabha TV. Please show us also,” says BJP’s Neeraj Shekhar.

Union Labour Minister Santosh Kumar Gangwar says a package of Rs. 27 lakh crore has been given under Aatmanirhar to help generate employment in rural sector. “There are 40 crore unorganised labour and 10 crore organised labour in the country,” says the Minister. He says, “1 crore labourers engaged in the unorganised sector returned to their home States during COVID-19. But many have now gone back.”

K.C. Venugopal of Congress asks why the price of petrol is at an all time high despite crude prices being at an all time low. “How many times has the Centre increased excise duty?” he asks.

Petroleum Minister Dharmendra Pradhan says, “Today, the price of crude oil in international market is $61. Before coming here, he should have checked with friends in Kerala as many live abroad. For the last three years we have reduced excise duty. For almost 250 days we have not increased or decreased the price.”

Vishambhar Prasad Nishad of SP asks why petrol was so expensive in “Ram’s land when it is cheaper in Sita’s Nepal?” Mr. Pradhan responds, “Should we compare ourselves with large economies or small economies? He took Nepal and Bangladesh’s name, the mass consumption items are expensive in these countries.”

Civil Aviation Minister Hardeep Puri, responding to a question about opening up air routes to over 80%, says, “Our decision to raise the frequency of commercial flights beyond 80% depends on the behaviour of the virus and commercial decisions to be taken by the air carrier.”

Mr. Puri, responding to AIADMK’s Tambidurai’s question on fluctuating airfares, says, “The sector is a deregulated sector. The government does not determine the price fixed by air carriers, it is the market that determines, can prescribe a band only in extraordinary circumstances.”

“The question is on assumption of domestic traffic. Airline industry is difficult to define, it includes airports and air carriers as well,” the Minister says when asked about the total losses incurred by airline industry due to COVID-19. “Nobody has an overall figure of the loss but it is reviving now.”

MoS Home Nityanand Rai on fencing along Bangladesh border says, “33 land acquisition proposals are pending with the West Bengal government. Around 60 km cannot be fenced making the area prone to infiltration. As many as 2,548 were caught while illegally entering the country. 2104 FIRs have been registered, in which 4,189 have been named and 4,072 arrested. 1,134 chargesheets have been filed but conviction has been seen only in 212 cases. The BSF catches the suspects, hands them over to local police but the State police does not act in the manner it should.”

Vinay Sahasrabuddhe of BJP, speaking first in the Zero Hour, says “I do not know if U.S. President has taken a cue from our Aatmanirbhar call. Consulting is a huge business. Foreign agencies are engaged in it mostly, turnover in 2020 was Rs. 27,000 crore. Foreign-origin consulting agencies are grabbing the business. Public policy has become a lucrative domain, and talented students are opting for that. The government should adopt a policy wherein Indian consulting firms are given importance. Local firms are losing out due to the existing norms,” he says.

Shaktisinh Gohil of Congress says, “As many as 1,100 fishing boats and 500 fishermen from Gujarat are lodged in Pakistan jails. Government should make efforts to bring them back.”

K. Vanlalvena of Mizo National Front says trade along the Myanmar border is closed due to COVID-19. “Some businessmen have constructed seven unauthorised roads, thousands of good are entering India through these roads. They might turn into smuggling roads if necessary action is not taken. Reopen the border trade to avoid unnecessary situation.”

Prasanna Acharya of BJD says a law must be framed for orphan children, to save them from exploitation.

Anil Baluni of BJP speaks about the ongoing rescue efforts in Uttarakhand. “Power projects and villagers have suffered losses. We can never forget the Kedarnath floods. The State is prone to glacier burst, cloudburst and earthquakes. I want to request the Centre to study the natural disasters affecting the State and devise a mechanism for the State,” he says.

Jyotiraditya Scindia of BJP says education of the girl child was impacted due to COVID-19. “The period saw an increase in child marriages. As per an RTI reply, the child helpline recieved18,324 distress calls. I request Women and Child Development Minister to collect data on child marriages, mobilise anganwadi workers on mission mode so that the girls can go back to school.”

Proceedings of the House begins

Jairam Ramesh of Congress seeks time to increase the time allotted for Budget discussion from 10 hours to 12 hours. Mr. Naidu says he will take a call.

Reports of the Department related Parliamentary Standing Committee on Petroleum and Natural gas;

Reports of the Department related Parliamentary Standing Committee on Commerce

Motion of Thanks on the President’s address

The Arbitration and Conciliation (Amendment) Bill, 2021

Reports of the Department related Parliamentary Standing Committee on Petroleum and Natural gas;

Reports of the Department related Parliamentary Standing Committee on Commerce 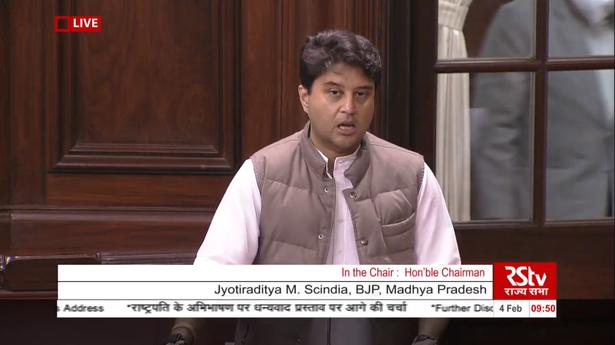