The Supreme Court-appointed committee will start meeting farmers groups from Thursday, according to one of its members.

“The three of us will hold our first meeting tomorrow [that is, on Tuesday] afternoon, probably at Pusa campus [of the National Agricultural Science Complex]. We will decide on our plans and the modalities for consultation with all stakeholders as the Supreme Court has directed. We will hold the first meeting with farmers groups on January 21,” Shetkari Sanghatan president Anil Ghanwat told The Hindu on Monday.

Apart from Mr. Ghanwat, the other members of the committee are agricultural economist Ashok Gulati who is a former chairman of the Committee for Agricultural Costs and Prices, and policy expert Pramod Joshi, who is former South Asia director of the International Food Policy Research Institute. The fourth member, veteran farmer leader Bhupinder Singh Mann who heads his own faction of the Bharatiya Kisan Union, recused himself from the panel, in solidarity with protesting farm unions demanding repeal of three farm reform laws.

The unions protesting on the borders of Delhi for almost two months have refused to meet with the SC committee, but Mr. Ghanwat who heads a pro-reforms union, is unfazed. “There are hundreds and thousands of farmers and farmers groups who are in favour of the laws and who are willing to meet with us. We will listen to them first,” he said. “We will keep on urging all farmers groups to talk to us as the Supreme Court has directed it. We are here to listen to everyone,” he added.

The SC committee would also meet with millers, food processors and other representatives of the agribusiness and food industry, said Mr. Ghanwat. However, there was currently no plan to meet with government representatives or agricultural scientists for their point of view, he said.

Even as the SC Committee holds its first internal meeting at Pusa tomorrow, protesting farm unions will be meeting Central Ministers for direct negotiations at the same time in Vigyan Bhavan, continuing a parallel dialogue process. 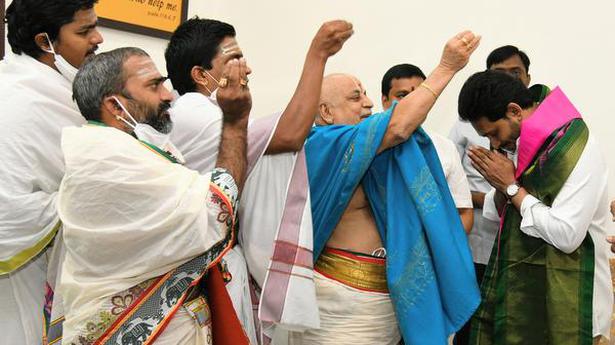 Birthday greetings pour in for Jagan