Polling in 234 Assembly seats in Tamil Nadu is underway at 7 a.m. on Tuesday.

The Election Commission has said that it will be conducting the polls with due COVID-19 health protocols such as checking the temperature of voters.

In Tamil Nadu, which faces a five-cornered battle, the AIADMK-led alliance with Edappadi K. Palaniswami as its Chief Ministerial face is seeking a renewed mandate. DMK president M.K. Stalin, heading a rainbow alliance, is making a strong pitch to form a government with him as Chief Minister for the first time. There is also T.T.V. Dhinakaran-led AMMK in alliance with DMDK and AIMIM. Tamil nationalist party Naam Tamilar Katchi and new entrant Makkal Needhi Maiam are also in the fray.

DMK president M.K. Stalin on Tuesday cast his vote for the Assembly elections in SIET College in Chennai and said that people are voting with enthusiasm and the polling process is going on peacefully.

Speaking to reporters, he said a higher voter turnout implies that the verdict is anti-incumbency, against the ruling AIADMK.

Mr. Stalin alleged that the AIADMK had sought to rescind the polls (in some constituencies) due to fear of losing elections.

He also said it is for the Election Commission to take action against money distribution.

Brisk polling was witnessed in the seven Assembly constituencies in Villupuram district on Tuesday.

Long queues of voters could be seen in front of polling booths in Tindivanam, Villupuram and Mailam.

COVID-19 protocols were adhered to and officials had marked circles in the polling booths to ensure physical distancing by voters.

Voters had their hands sanitised and were screened with thermal scanners before entering the polling booths.

PMK founder S. Ramadoss exercised his franchise at a polling booth at Sri Maragadhambigai High School in Tindivanam at around 7.30 a.m.

Speaking to reporters, Dr. Ramadoss claimed that people were happy with the performance of the AIADMK government and said that good governance should continue in the State.

Replying to a question on opinion polls predicting a landslide victory for the DMK-led front in the elections, he said that people attached little value to opinion polls.

“They are not opinion polls but only a compulsory imposition of opinions,” he said.

A total of 16,85,810 voters are expected to cast their votes in the election. Of the total 2,368 polling stations, as many as 53 and 33 booths had been identified as vulnerable and critical respectively.

In the Nilgiris, two all women-polling booths have been set up.

The two polling booths are at St. Joseph’s College of Education and the Gel Memorial Girls Higher Secondary School in Udhagamdandalam. Both booths, in Udhagamandalam constituency, have polling officers, presiding officers and security personnel who are women. – Rohan Premkumar

Mercy Devadarshini, a 22-year-old first time voter said she was excited to cast her vote for the first time. She couldn’t vote last time as her ID came in late and hence was looking forward to it this time. – Sunitha Sekar

Ninteen-year-old Gautam Ravi, a BTech mechanical engineering student, cast his vote for first time at the voting centre in Don Bosco school, Katpadi . He said he and all his friends were excited. “My friends will opt for NOTA. I have a strong political view and I have cast my vote accordingly,” he said. 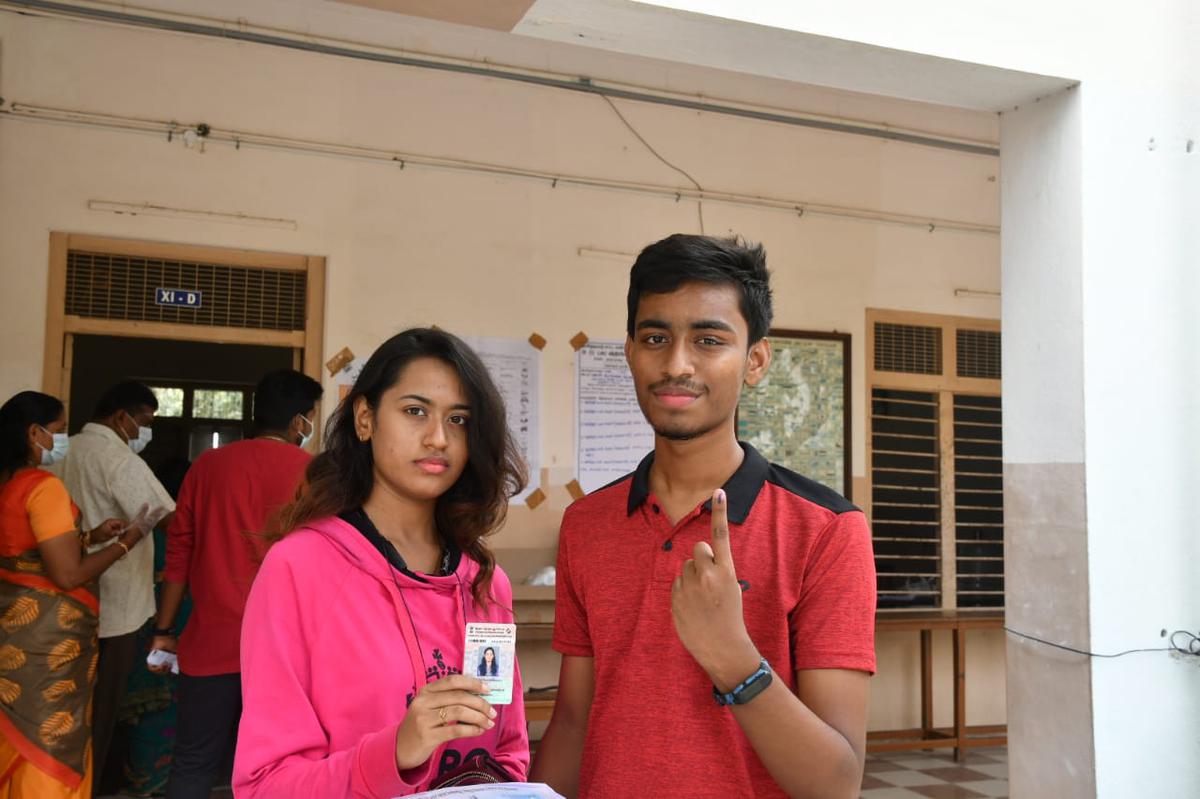 Gautam Ravi voted for the first time in 2021 elections. He was accompanied by his sister Divya Ravi who couldn’t vote as her name was missing from the voter’s list.

His sister Divya Ravi, a  medical student, also came to the booth to vote, but her booth slip was not there. “Last time also I couldn’t vote, this time also there is some confusion,” she said. – Vivek Narayan DMK president M.K. Stalin poses with the ink mark on his index finger after casting his vote at SIET College on Tuesday.
| Photo Credit: M. Vedhan

In polling booths in many parts of Chennai, including T. Nagar, Teynampet and Egmore, senior citizens walked into polling booths as early as 6.30 a.m. While in some booths voters stood in queues maintaining social distancing, crowds were reported at many place. Sreemanthammal, an 85-year-old voter, casts her vote at a polling booth at R.S. Puram in Coimbatore.

At the polling booth in Hindi Prachar Sabha, senior citizens were given masks, gloves and sanitisers and temperature checks were done. A few senior citizens came in wheelchair and said that the facilities were comfortable for them.

Polling began late at several booths in Chennai city. Even after 7 a.m, conservancy workers were seen cleaning the premises and election officials were holding preparatory meeting. Many voters who had queued up in long lines grew agitated.

Additionally, many were made to travel across booths as they were not provided booth slips which inform which polling booths they should go to cast their votes. Often, they had had to depend on political functionaries at street corners for information on polling booths.

At SIET College in Teynampet, polling started around 7 a.m. except in one booth where it was delayed for half hour. A few polling booths in Ambattur were crowded as early as 7.45 a.m. There was initial hiccups in voting process. The polling process was delayed by half hour and this led to crowding at Kallikuppam, where there were no marks to indicate how physical distancing is to be maintained.

The Guru Nanak School in Chennai, which doubled as a voting centre, looked festive with its entrance decorated with balloons, vazhai maram and shamiyana, and the box of chocolates that welcomed each voter. But the voting machine in one of the four rooms that was assigned for women malfunctioned for an hour, delaying the start of voting by an hour. 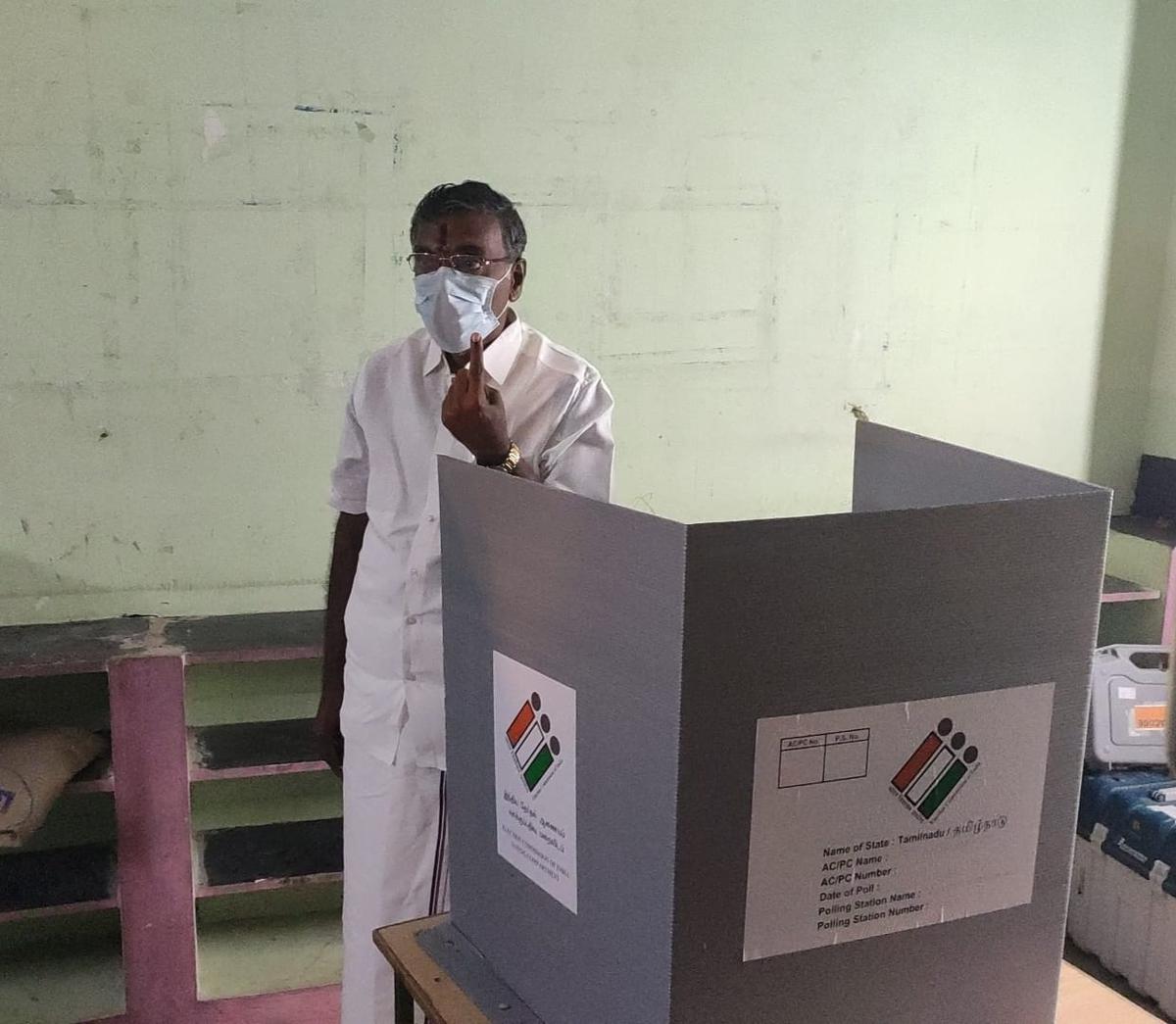 Chennai queues up to vote

Voters began to queue up at booths from as early as 6.45 a.m. in South Chennai.

People have been designated to carry out temparature checks and give sanitiser to the voters and disposable gloves were being given as well. Voters at the Chennai High School in Eldams road who queued up at 7 a.m. were all seen wearing masks.

Actor and Makkal Needhi Maiam President Kamal Haasan cast his vote along with his daughters Shruti Haasan and Akshara Haasan at Eldams Road. In Thiruvanmiyur, actors Ajith and Shalini cast their votes early in the morning as well. Actors Surya and Karthi too exercised their franchise in a polling booth at T.Nagar. – S. Poorvaja

Many commuters who are employed in Hosur were unable to find buses back to their home town in Tirupathur on election day to cast their votes. 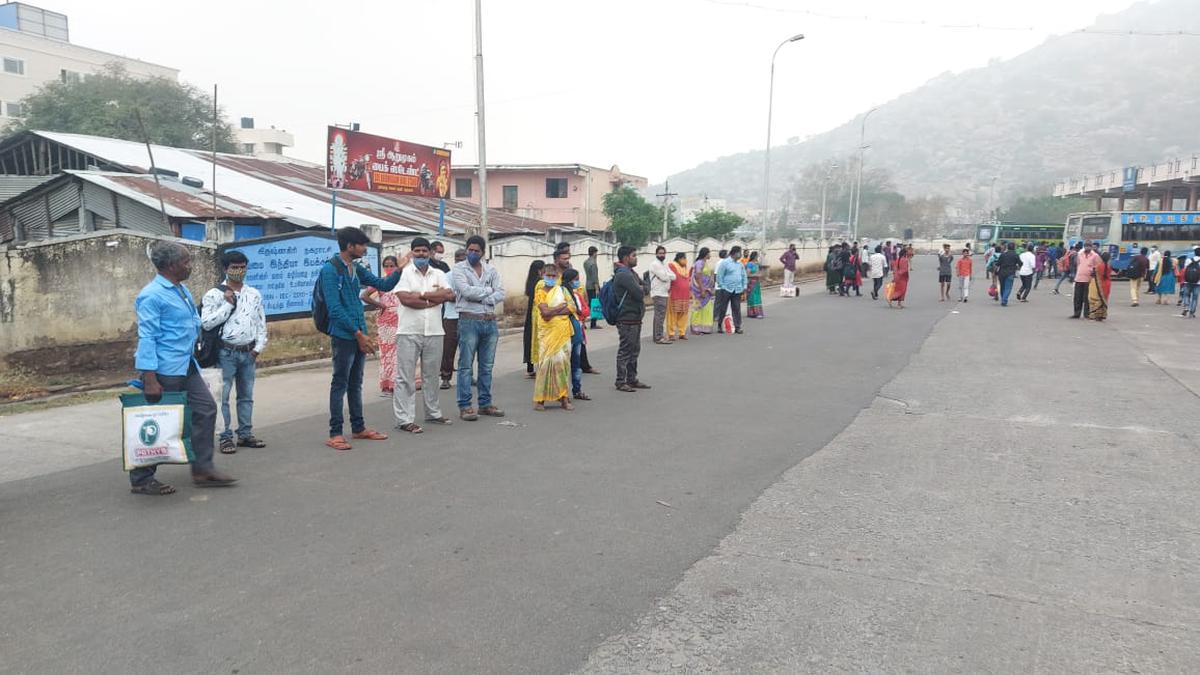 Commuters were waiting it out for connecting buses from Krishnagiri bus stand to Thirupathur.
| Photo Credit: P. Srividya

No vote has been polled so far as voters waiting in long queue in this coastal hamlet. Polling for the Assembly elections has begun on a brisk note in four constituencies in Karur district. Long queues were seen in most of booths in Kulithalai, Krishnarayapuram and Aravakuruchi. Several voters reached the booths even before 7 a.m. All voters were sanitised before reaching their respective booths. Similarly, plastic gloves were distributed to the voters for protecting themselves from COVID-19 infection while casting vote. – C. Jaisankar

People started lining up early in the morning eagerly to cast their votes. Actors Rajinikanth and Ajith Kumar were among the early voters in Chennai. Actor Ajith along with his wife Shalini wait to cast their vote at Thiruvanmiyur ECR School in Chennai. 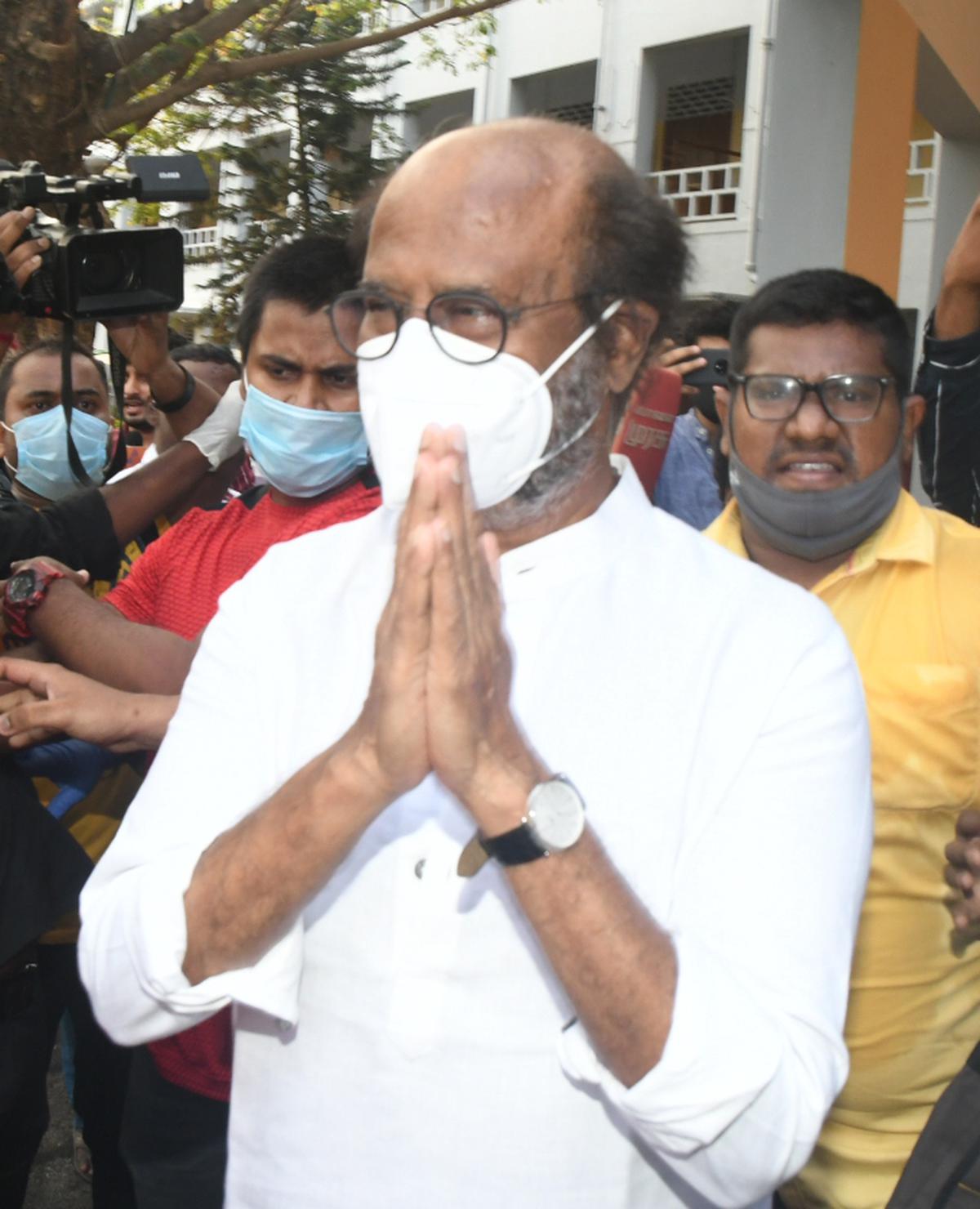 Polling in 234 Assembly seats in Tamil Nadu went underway at 7 a.m. on Tuesday.

The Election Commission will be conducting the polls with due covid-19 health protocols such as checking the temperature of voters.

With reference to the poll snippet relating to posters by BJP that appeared on April 5, 2021, BJP has clarified that no such poster was printed by the party terming Tamil Nadu as Dakshina Pradesh.

With regard to the posters and the images that went viral on social media, BJP spokesperson Narayanan Thirupathy told The Hindu that the posters were definitely not printed or pasted by the party and in fact the posters by the party had used the word Tamil Nadu.

When asked whether somebody else was behind the posters, he replied that it could be political opponents with an ulterior motive to damage the poll prospects of the BJP.

For the first time, EVMs carried up Neknamalai in a vehicle

Forty-year old Chinnathayi looks astonished as she sees a vehicle, carrying the EVM unit, snake up through a dusty dirt road on the rocky Neknamalai hill in Vaniyambadi Taluk. This is the first time the unit is being carried up the hill using motorised transport.

“All these years, the machines used to be carried on donkeys or using dolis up the hill to Neknamalai village located five kilometers away from the foothills. This time, the dirt road was created by clearing the rocks to give us COVID-19 relief and because ministers visited our village, ” recalls Ms. Chinnathayi, who was walking to the village with a bag of vegetables due to lack of transport facility.

The name of V K Sasikala, confidante of late Chief Minister J Jayalalithaa, has been ‘removed’ from the voters list and it is an ‘injustice,’ her legal counsel said in Chennai on Monday.

She was sad about it and legal action would be initiated against the official responsible, he said. 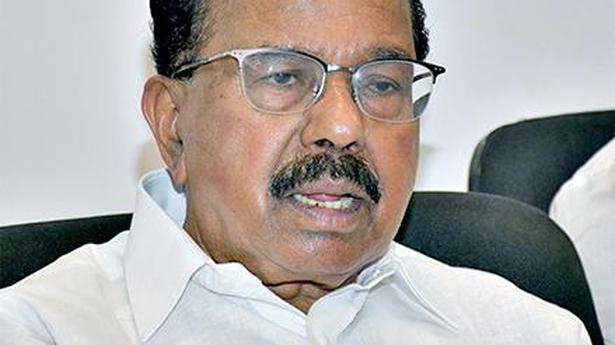 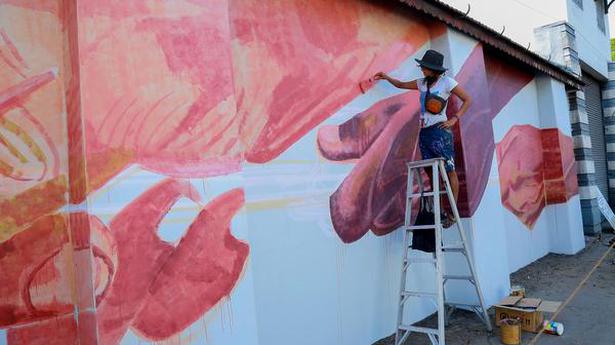