President Ram Nath Kovind will inaugurate the centenary celebrations of the Tamil Nadu legislature tomorrow. The occasion is significant for more than one reason. The House has passed several epoch-making legislation, beginning with voting rights for women in 1921

The Assembly chambers at Fort St. George, the 17th-century vestige of the colonial era and Tamil Nadu’s seat of power, will witness a historic event on Monday (August 2) when President Ram Nath Kovind inaugurates the centenary celebrations of the State legislature.

For the State that boasts a Chola inscription of around 920 CE in a tiny town of Uthiramerur, about 90 km south of Chennai, dealing with a written Constitution, the celebration carries a special meaning beyond the fact that the legislature has completed 100 years of existence.

Tamil Nadu witnessed elections in November 1920 when electors (only men), accounting for just 3% of the population, were enrolled, as a result of the Montagu-Chelmsford Report and the Government of India Act of 1919. The development paved the way for a more representative body than what it was till then. The proportion of elected members increased to over 70%. The concept of dyarchy came into being with Ministers, who were Indians, gaining limited control over certain subjects, such as local self-government and education. It was then that the office of the Chief Minister, also called Premier, got instituted. Besides, one seat in each territorial plural-member constituency — 28 in all — was reserved for non-Brahmins.

With the Congress boycotting the election, the Justice Party romped home. Eugene F. Irschick, an American historian, in his 1969 work, ‘Politics and Social Conflict in South India, the Non-Brahman Movement and Tamil Separatism, 1916-1929’, points out that the House included 65 non-Brahmin Hindus and 22 Brahmins, apart from five members of the Scheduled Castes who were official appointees.

The first Ministry of the Justice Party, a precursor to the present DMK, saw to it that two government orders (G.O.), famously called ‘Communal G.O.s’, were issued in September 1921 and August 1922. For the first time, caste became the basis for appointment to public services. It took over 70 years for the Central government to follow the principle in its institutions for education and employment. In December 1993, the scheme of 69% reservation for Backward Classes, Most Backward Classes, Scheduled Castes and Scheduled Tribes, in vogue in the State only through executive orders till then, got legal safeguard when the Assembly adopted a Bill. The law was subsequently included in the IX Schedule of the Constitution, through an amendment passed in Parliament, so that its validity could not be challenged. The then Chief Minister Jayalalithaa took the lead in providing legislative support to the scheme of reservation.

Talking of the most significant fallout of the 1920 election, M.E. Duraipandiyan, former Additional Secretary of the Assembly Secretariat, points out that as women were not part of the electorate, the Council, in its first session in April 1921, resolved to provide voting rights to women. Subsequently, it decided to remove the restriction on women getting elected as members. In early 1927, Muthulakshmi Reddy, the well-known medical practitioner and social activist, became the first woman member of the Council and, in no time, became the Deputy President of the Council.

There were several moments of pride associated with the Assembly. One of the Congress stalwarts, S. Satyamurti, by rendering the banned songs of Subramania Bharati in the Legislative Council in October 1927, highlighted the issue and got the ban lifted subsequently. The 88-year-old Kumari Ananthan, former TNCC president, who was elected to the Assembly on four occasions and the Lok Sabha once, recalls that when Kamaraj was at the helm of affairs, C. Subramaniam, as Finance Minister, was the first to make a budget speech in Tamil in 1957-58. He points out that Si.Pa. Aditanar, as Speaker during March 1967-August 1968, introduced the practice of commencing the House’s proceedings with the recital of a verse from Thirukkural.

When Omandur P. Ramaswami Reddiar was the Chief Minister in the late 1940s, the government gave a convincing reply in the Assembly during a debate on the State government’s emblem of temple gopuram and got the issue resolved. During the two-year rule of the DMK founder C.N. Annadurai, the Assembly, in July 1967, adopted a motion renaming Madras State as Tamil Nadu, which later got the approval of Parliament too, Mr. Ananthan explains.

Another former official of the Assembly Secretariat points out that during Jayalalithaa’s first innings as Chief Minister, “Tamil Thai Vazhthu” was rendered in July 1991 for the first time at the beginning of the Governor’s address.

K. Balabharathi, a three-term legislator of the CPI(M), says that to the credit of the legislature, it has passed several landmark laws for the welfare of women, such as Devadasi abolition, equal rights to women in property and constitution of the State Commission for Women.

Mr. Duraipandiyan says that while Mr. Panruti Ramachandran and K. Kalimuthu, as Ministers in the AIADMK regime, were sharp and brief in their replies, Mr. Duraimurugan, while representing the treasury benches, could gauge the mind of the Opposition well ahead of the latter completing their observations. In the late 1970s, Chief Minister M.G. Ramachandran, perhaps, made the longest reply to the discussion on the Governor’s address. Mr. Panruti Ramachandran, a seven-term MLA (elected on tickets of four parties), recalls that the entire line-up of members of the Opposition in the late 1960s and early 1970s was outstanding. This included Swatantara Party’s D.S. Authimoolam and H.V. Hande (who later switched to the AIADMK and the BJP), Forward Bloc’s P.K. Mookiah Thevar and the CPI(M)’s A. Balasubramaniyam. The 93-year-old Hande, former Health Minister, who served both the Legislative Council and Legislative Assembly during 1964-86, admires the way in which Karunanidhi and his long-standing colleague, K. Anbazhagan, enlivened discussions in the legislature.

Of late, the Assembly is taking steps to use technology in a big way and the State has joined the National e-Vidhan Application (NeVA), a programme meant for digitisation of the working of legislatures all over the country. “We are moving towards a paperless legislature and to begin with, e-budget will be presented this year,” says M. Appavu, Speaker.

The Assembly website now contains the transcript of debates held during 2011-20.

In the long history of the State legislature, there were many black spots too.

Scenes of pandemonium were witnessed in December 1972 when then Assembly Speaker K. A. Mathialagan was removed from office and in January 1988, when 33 MLAs of Jayalalithaa’s faction in the ruling AIADMK were disqualified on the day the Ministry headed by Janaki Ramachandran sought a vote of confidence. In March 1989, when Chief Minister M. Karunanidhi rose to present the State Budget and Jayalalithaa wanted a privilege motion to be brought in against the Chief Minister, there was a commotion leading to the ruling and Opposition parties using their lung and muscle power.

In November 2003, amid protests from the entire Opposition, the then Assembly Speaker Kalimuthu awarded, on the adoption of a motion by the House, a 15-day simple imprisonment to The Hindu’s then Editor N. Ravi, Executive Editor Malini Parthasarathy and three others, besides S. Selvam, Editor of Murasoli, all for breach of privilege. Another infamous instance of the Assembly acting against a senior journalist was the one concerning S. Balasubramanian, editor of Ananda Vikatan in April 1987. While the Supreme Court later stayed the operation of the sentence against the senior journalists of The Hindu, Balasubramanian, after being kept at the Central Prison for two days, was released in deference to the wishes of the then Chief Minister M.G. Ramachandran.

In February 2017, the Assembly experienced commotion when the regime, led by Edappadi K. Palaniswami, won a vote of confidence.

On the matter of legislature versus judiciary, former Assembly Speaker Sedapatti R. Muthiah, whose tenure of 1991-96 too saw a few breach of privilege proceedings against the Press, including the Illustrated Weekly of India, feels that there is still no clear separation of powers of the legislature and the judiciary. However, he concedes that with regard to disqualification of legislators, there exists the scope for judicial intervention.

For several years, there have been voices of concern over the declining quality of debates in the legislature. Mr. Panruti Ramachandran says the problem lies in the selection of candidates. Mr. Duraimurugan, now Water Resources Minister, and who is a long serving member of the Assembly, does not agree with the criticism and says that as in the past, there are legislators who come to the House thoroughly prepared.

Stressing on the importance of regular discussions in the legislature, Dr. Hande recalls how an adjournment motion on the language issue, at the heat of the anti-Hindi agitation in January 1965, was taken up for a debate in the Legislative Council, after the Chairman M.A. Manickavelu was deftly persuaded by A. Lakshmanaswami Mudaliar, Leader of the Opposition, though the Assembly refused to have any discussion on the subject.

Former Deputy Speaker V.P. Duraisamy, now in the BJP, says the Opposition should be given more time to make their point. Former CPI floor leader, G. Palanichamy, quotes C.N. Annadurai, who had said the ruling party should keep its ears open and the Opposition should keep its mouth open. Former Speaker R. Avudaiappan is hopeful that the situation will improve under the present DMK regime. And this is not just the wish of Mr. Avudaiappan alone.

“An emblem of this variety will not take away the secular character of the government…In choosing an emblem, we have to take into consideration something which typifies generally south Indian culture. We cannot think of anything else for this purpose than a temple gopuram.”

B. Gopala Reddi, Finance Minister and Leader of House in the Legislative Assembly, on July 15, 1948

January 1921: The Madras Legislative Council, the biggest body of its kind in India, constituted with 127 members, including 98 elected representatives, and a fixed term of three years, meets at Fort St. George. It was inaugurated by Prince Arthur, Duke of Connaught, and uncle of George V, Emperor of England, on January 12 C. Rajagopalachari, Premier of Madras, presenting his first Budget in the Assembly on September 1, 1937.

July 1937: Bi-cameral legislature formed with the Legislative Assembly having 215 members and the Legislative Council having 56.  Holds deliberations at Senate House in the Chepauk campus of the University of Madras and Banqueting Hall (Rajaji Hall) in the Government Estate till October 1939, before switching back to Fort St. George

March 1952:  The first Assembly after Independence is constituted with 375 seats with 243 single-member constituencies and 66 double-member constituencies. The Legislative Council’s strength rose to 72 members, including 12 nominated members.  Meets at the Children’s Theatre (later called Kalaivanar Arangam) on the Government Estate April 1957: Subsequent to reorganisation of States on linguistic lines, the Legislative Assembly strength went down to 205. Fort St. George yet again becomes the venue of deliberations, and remains so till January 2010

April 20 to May 9, 1957: the only occasion when the Assembly and the Council met outside Chennai – Aranmore Palace, Udhagamandalam 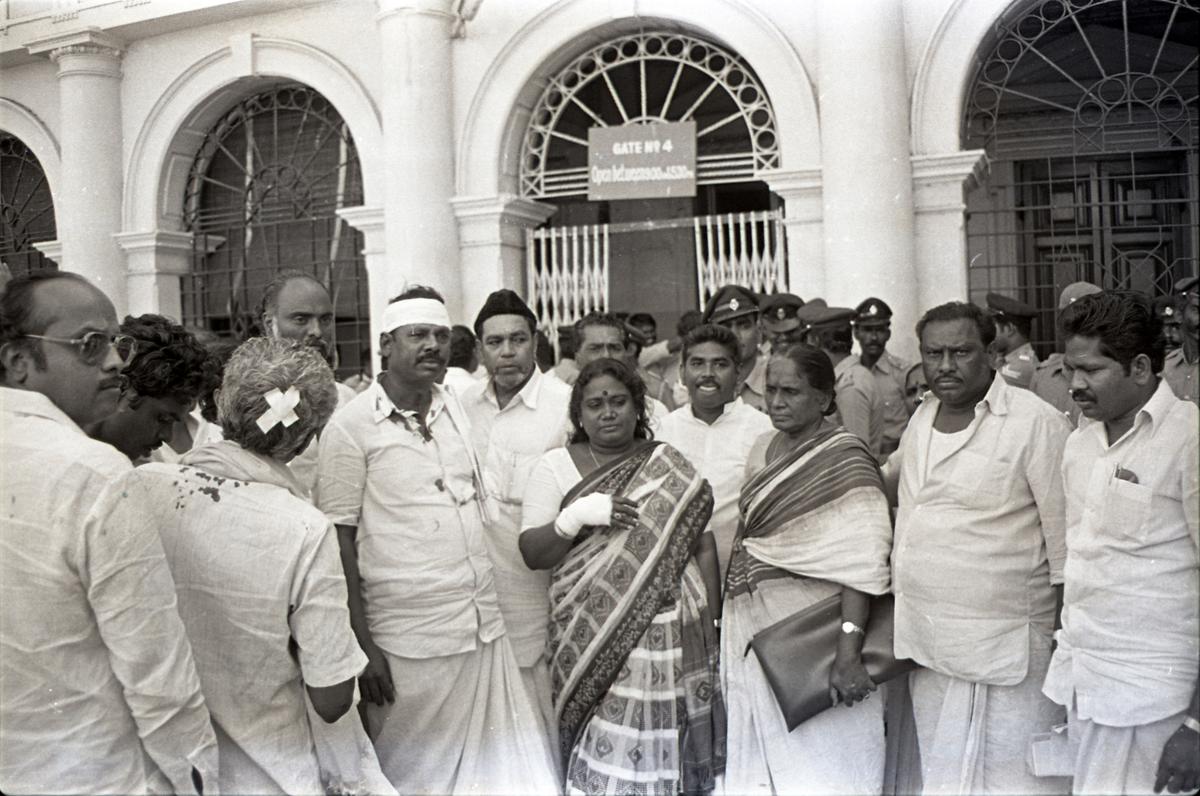 Congress MLAs D. Yasoda and R. Easwara injured in the clash between the ruling AIADMK and Congress during the Janaki Ramachandran government’s trust vote on January 28, 1988. 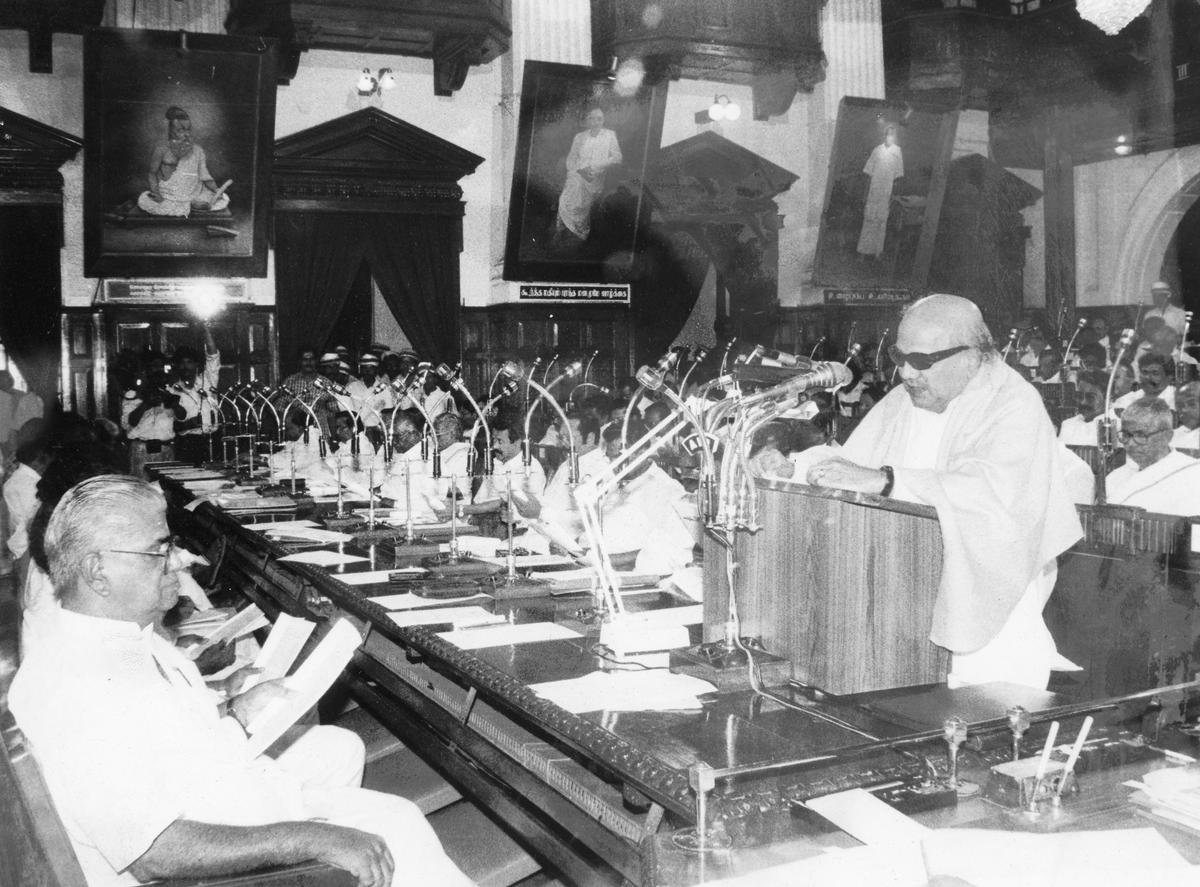 May 2011: Assembly moves back to Fort St. George

Leader of Opposition and DMK working president M.K. Stalin walking out of the Assembly in a torn shirt after the trust vote for Chief Minister Edappadi K. Palaniswami was held on February 18, 2017.

September 2020: Assembly begins holding deliberations at the new Kalaivanar Arangam in the Omandurar Government Estate, in tune with personal distancing norms due to the COVID-19 pandemic

Presidents or Chairpersons of Legislative Council:

Premiers or Chief Ministers of Madras Presidency or Tamil Nadu 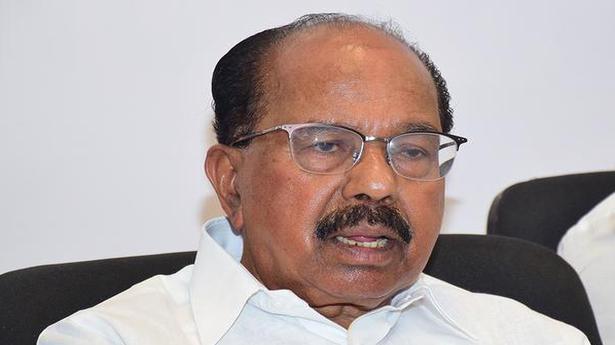 ‘AIADMK acting as a slave of the BJP’ 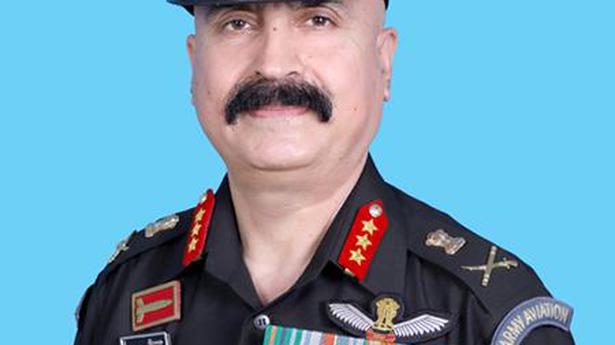 Army to get indigenous light helicopters by Dec. 2022 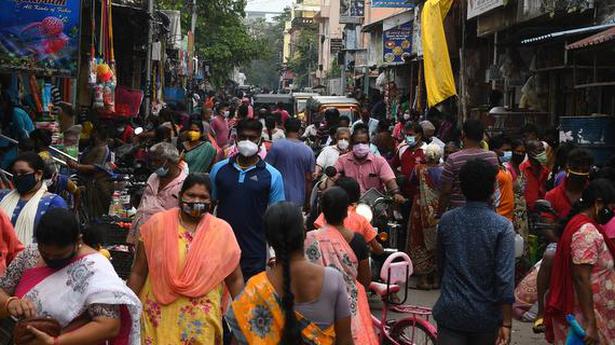